Founded in 1980 in Brooklyn, New York, Metro grew organically over several decades under the leadership of its founder, Bill Wilson. As the organization grew in size and scope, expanding to several countries around the world, it saw the need to re-position the organization as a leading global children's ministry. Metro also wanted to expand its reach by raising awareness among new followers and supporters.

In 2012, Metro Ministries, was experiencing world-wide growth, transitioning from a neighborhood Sunday School program in Brooklyn, New York to an international organization reaching more than 100,000 children around the world each week. However, Metro's brand did not reflect the way the ministry was growing. While Metro was living an incredible story in the heart of some of the world's most dangerous places, this story was not being told in a way that reached new audiences and, in turn, new supporters. Additionally, with programs in six different countries and offices around the world, the organization's branding and communications were not consistent across its various global locations.

Metro needed to find a way to better communicate its growing mission and build a central and consistent brand that would be reflected internationally, especially as the organization continued to grow globally. Highly focused on ministry and relying on a base of long-term supporters and rigorous fundraising efforts by Pastor Bill Wilson, Metro also needed to build an attractive brand that would connect with new audiences and offer a strategic foundation for marketing efforts beyond the day-to-day ministry and events. Metro engaged The A Group for strategic guidance on how to best establish this brand, position themselves for growth and reach new and current supporters.

After a strategic analysis of Metro's existing brand, supporter database and key differentiators compared with similar organizations, The A Group recommended a full rebrand of the organization, changing both the name and updating the look to position Metro as a leading, global inner-city children's ministry. After selecting the name "Metro World Child", the team began a nine-month rebranding process, focusing on brand development, new web presence for both the U.S. and all international sites, writing and designing new collateral, digital marketing materials and social media. With the big announcement set for February 2013, The A Group developed a communications strategy to first announce and explain the name change to Metro's loyal supporter base as well as a longer-term marketing plan to help the ministry reach new audiences and grow its donor base, both today and in the future.

Additionally, in the interim while the new brand was being developed, The A Group came alongside Metro to assist with social media content and management, digital fundraising initiatives and other strategies to increase supporter engagement leading up to the launch of the new brand.

Branding
Starting with the new name, Metro World Child, The A Group developed a full brand - including both positioning and visual branding - around the new name. We created a logo, brand statement, key messages and boilerplate content to clearly communicate Metro's global and faith-based, child-focused mission. The A Group then took this brand positioning and developed an updated and consistent visual brand, from subtle textures and images used throughout the Metro catalog to full marketing campaigns around the theme "I am a Metro World Child". The "I am a Metro World Child campaign" was focused on telling the stories of Metro World Children from around the world, featuring strong visuals of children and contrasting statements, first showing the difficult circumstances these children face and then demonstrating the hope found in Christ.

After establishing this brand, The A Group developed a comprehensive brand usage guide and graphics kit to be used through all of Metro's international offices for global consistency. 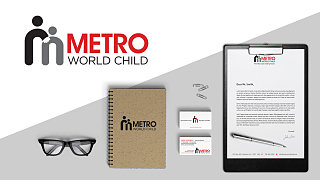 Collateral
After establishing a visual brand, The A Group applied these to a full set of collateral. We developed content and design for key marketing pieces, including stationery, branded folders, donor relations pieces, marketing trifolds and an overview brochure showcasing both Metro's mission and stories from children around the world.

Metro also offers child sponsorship in the United States and around the world, so as part of the rebrand process, The A Group wrote and designed both U.S. and international sponsorship packets, including child profiles, registration materials, bookmarks, magnets and informational booklets. We then took the initial set of packets and updated these for different international locations and offices, resulting in more than 50 different pieces in several different languages for sponsorship packets alone. 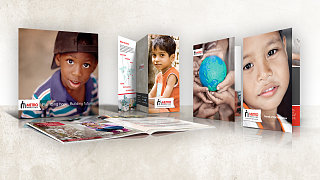 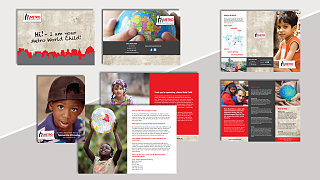 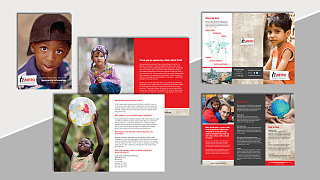 Web Presence
To go along with the new brand, Metro needed a new website - one that reflected both the updated look and the updated messaging. The A Group reorganized the site and wrote new web content, then designed a new look for the site. The new Metro World Child site was developed on TAG Tools, our proprietary content management system, making it easy to update and seamlessly integrating with Metro's donor management software.

With programs in six countries and offices in six additional international locations, not only did Metro face the challenge of changing the name and look of a 30-year-old organization, but this change had to take place consistently across the globe and in a variety of languages, including nine different websites. The A Group developed a global web platform that allows Metro to replicate their new website, selecting pages and content, adding unique images and even translating the site through a Languages module in TAG Tools. On the day of launch, all global locations switched to the same new site design using this global platform. 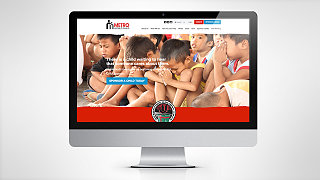 Digital Marketing
Before partnering with The A Group, Metro relied heavily on direct mail for marketing and fundraising. With more people - especially younger audiences - relying on email and social media for information, The A Group sought to introduce digital media to complement these fundraising efforts. For each direct mail piece distributed (typically surrounding a specific fundraising initiative such as Thanksgiving for Christmas gifts), we developed an email template, email marketing content, social media content and share banners. These emails were sent one week after the mail drop to reinforce the initiative.

By using fundraising initiatives to establish a digital presence, we were able to lay the foundation for future digital fundraising and storytelling around different campaigns, videos, or announcements. 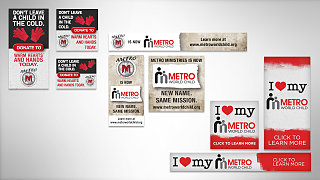 Launch
In addition to developing the new brand and materials, The A Group provided strategic guidance on how to announce the new brand to existing donors and the general public. Not only did we want to answer questions and alleviate any concerns from those inquiring about the change, but we also wanted to use this opportunity to build momentum and make the launch an exciting platform to generate support. Because the rebrand was driven by international growth and expansion of the mission, we focused messaging on the exciting growth and opportunity to reach new areas of the world.

The A Group created:

The Metro World Child brand launched to a very receptive audience of both current and new supporters. Through direct mail, email blasts and social media, we announced the new name and gathered overwhelmingly positive feedback and reactions to the new name and look. In the week following the launch, Metro also saw a direct increase in web traffic and social media engagement.

In the years since the rebrand, Metro has grown and evolved tremendously as an organization. The brand has now become an established brand that offers meaning and stands on its own. Metro has continued to invest in its marketing and fundraising, optimizing efforts and expanding its support base, including social media followers, donor files and child sponsors. The organization recently moved to a larger headquarters in Bushwick, Brooklyn and reaches nearly 65,000 children more each week than it did five years ago.

The A Group has also maintained a close relationship with Metro over the last five years, partnering strategically with the organization on its web strategy, child sponsorship strategy, donor appeals, newsletters, Ambassador program and more. We have been honored to continue to provide strategic direction and consultation as well as tactical services such as content creation and design. Currently, The A Group is in the process of redesigning the Metro World Child site, creating a more modern and functional site to keep up with the changing times.

It is amazing to see how investing in strategic branding and marketing efforts both laid a foundation and created momentum for Metro World Child's ongoing growth. The long-term relationship we have with Metro is an incredibly fulfilling partnership for our team, one where we know our work has real meaning as we help equip those who are changing lives everyday.